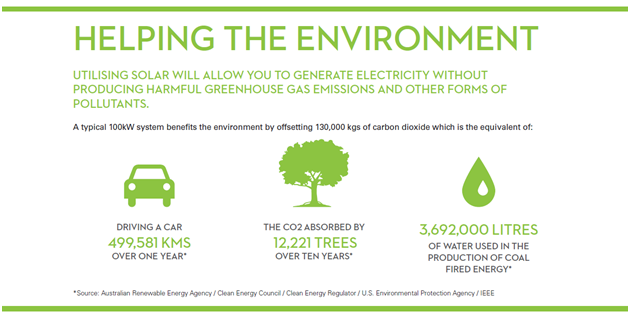 Some of the key advantages of solar energy on the environment include:

Water is one of our most precious natural resources. We live on the driest continent on the planet, and we run the risk of running out of fresh water in the future. Traditional electricity production can use thousands of litres of water each year. Water is used for cooling generators, processing and refining fuel and transporting fuel through pipes. Generating power through solar panels, however, uses no water whatsoever. The operation of solar photovoltaic cells doesn’t require water at all to generate electricity, reducing the strain on this precious resource. The only water needed is rainwater to naturally clean the panels when they get a bit grubby!

The air we breathe can help or hinder our health and wellbeing. Electricity generation from fossil fuels can generate harmful carbon dioxide and methane gases that lower the quality of the air we breathe. Breathing poor quality air on a daily basis can have dire consequences for our health. Air pollution has been linked to asthma and allergies, bronchitis, pneumonia, headaches, anxiety, heart attacks and even some cancers. Using the sun to generate more and more of our power means less and less harmful emissions from burning fossil fuels. Generating electricity from solar panels produce no harmful emissions, and the more homes and businesses that rely on solar power means less toxic emissions from fossil fuels into our air.

The release of toxic gases into the atmosphere, such as carbon dioxide, methane and nitrous oxide, doesn’t just contribute to air pollution, but also contributes to the enhanced greenhouse effect. While the greenhouse effect is a natural process that warms the Earth’s surface to a liveable temperature, human activities, such as the burning of fossil fuels, have increased the amount of greenhouse gases in our atmosphere. This has led to the enhanced greenhouse effect, which is warming our earth faster than ever before. In recent years, this has been linked to a number of catastrophic weather events, such as flooding, cyclones, storms, extreme heat and drought. Generating electricity from solar panels produce no greenhouse gases whatsoever, and so can help to reduce the effect of climate change if used widely. With solar energy powering a home or business, there is no burning of fuel and no emissions from energy production.

Solar energy is one of the cleanest sources of energy, and it’s an extremely effective way of your household more efficient and sustainable. Solar panels don’t use any water to generate electricity, they don’t release harmful gases into the environment, and the source of their energy is abundant and, best of all, free. Using solar energy instead of the grid also means you reduce the need for carbon dioxide emitting energy to be produced for the grid on your behalf – for energy users on mainland Australia, you could offset anywhere between a half to one tonne of carbon dioxide for every megawatt-hour of solar energy you use. With even a small system installed on your home, you can help reduce your household’s carbon footprint and contribute personally to the Australian Renewable Energy Target.

5. Reducing our reliance on fossil fuels

Solar energy supplies are massive; if we could harness all of the sunlight shining on the earth for just one hour, we could use that energy to power the entire world for a whole year. The sunshine used in solar energy production is free, and there’s lots of it. On the other hand, fossil fuels are running out, and fast. Reducing our reliance on these finite resources and taking advantage of an abundant, free source of energy, such as sunlight, could mean lower energy prices, reduced greenhouse gas emissions and a stronger, more stable energy future.

Solar power has wide-ranging advantages for our planet, especially when it comes to our environment.

From reducing greenhouse gases, improving our air quality and conserving our precious water, solar energy can help to reduce our reliance on fossil fuels and lower energy prices for years to come.

A safe and low-impact energy source

Sunlight is free, infinite and easily accessible, unlike fossil fuels, which need to be mined, extracted and transported. These processes cause serious land and ecological degradation, and carry the risk of disasters such as oil spills.

In 2015, an estimated 5,271 million metric tons of CO2 were released from energy-related sources. In contrast, renewable energy sources such as solar power release little to no CO2 emissions. In fact, as more homes and businesses switch to solar, we can collectively help reduce the harmful effects of carbon dioxide emissions and pollution.

Get Your Solar Project Started Today!